Reclaiming Her House – Especially The Kitchen

Reclaiming Her House – Especially The Kitchen

I want to share an interesting story with you that happened to my client.  If we go back a few years, she and her husband were having problems and they decided to separate and then divorce.  As a result, she moved out of their lovely custom home and rented two different properties over a two-year span.  When the divorce was final, she actually was able to move back into her custom home.  So, she stopped paying rent and moved back in!  How awesome, right?  Well not exactly.  Family helped her move back in right before the holidays but then the unimaginable thing happened, she fell on ice and broke her ankle in multiple places!  While she was moved back into her home, she wasn’t settled.  She made it a point to put up some decorations for the holidays but mostly everything else was still undone. This is when she reached out to me.  She had every intention of unpacking and letting the dust settle but with a broken ankle and her grown children working, there was just too much for her to do and she was overwhelmed.

While I helped her organize several areas of her home (office, garage and storage) her kitchen was our last project.  When she showed me the junk drawers, they were still full of ‘his’ junk.  There were supplements and various other items that were simply left behind for her to deal with and he moved on.  We took the time to empty every cabinet, drawer and cupboard.  We took inventory of what she wanted to keep and donated what was left. His items were finally removed and no longer in the way.  From there, we gave careful consideration to the kitchen and organized it in a way that works for her and her children.  The kitchen is large and lovely and it took more than one session but when I finished it, everything made sense.  Her son, who likes to cook, said that it’s so much better to have his spices next to the stove instead of in a pantry.  The pantry is now organized with the appliances she uses the most and now they are easily accessible.  Her other pantries hold their food and there is actually some unused space!  Her daughter, who likes to bake, has the corner cabinet for bakeware and the lazy susan for all her baking supplies.

It felt so good to be able to help her reclaim her kitchen space and to organize it in a way that they can all embrace it and enjoy family time together.  There are so many times that I get overzealous and start the project before I take the ‘before’ pictures (working on that!)  That happened with this one, I just dug right in.  I’m sharing pictures of it in progress and completed.   As I often tell my clients, it will get worse before it gets better and that’s what the ‘in progress’ picture shows.  But, the after pictures show how much better this kitchen flows. 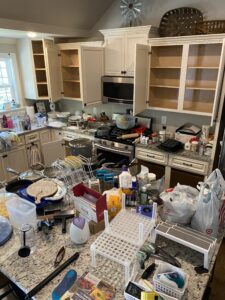 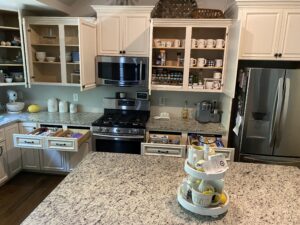 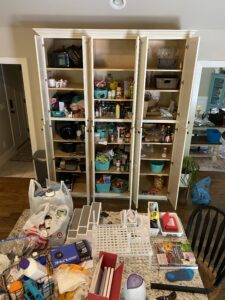 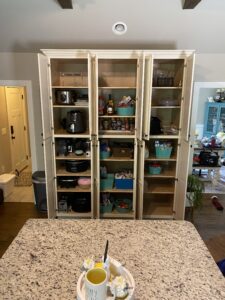 If you are facing challenges with spaces in your home, let me come and lend a hand!  It would be my pleasure to help you reclaim your space too!